The Darley Yorkshire Oaks is a group 1 race, for fillies and mares, run over 12 furlongs at York. This years race has only one prior group 1 winner in it, but a few unexposed sorts could yet be up to that standard. 8 runners are set to go to post, and they all have some sort of a chance. I preview the runners and give my best tips for the race.

The Fugue is the previous group 1 winner in the field, and her best form is probably better than anything else in this race. She won the Nassau Stakes at Goodwood last season before coming 2nd in this race. That day she came 2nd to Shareta, having looked set to win when looming up 2 furlongs out. The pace was steady, and the race turned into a bit of a sprint up the straight. That should have suited The Fugue as she is quite a weak finisher at 12 furlongs, and I think she will be again tomorrow. She has some good form at 12, having been placed in the Oaks, and the Ribblesdale, but each time she runs at 12, she gives the impression she’d be better over 10 furlongs. It was over 10 furlongs that she looked to put up her best performance, winning the Nassau Stakes quite cosily. The Fugue started this season off well, with a staying on 3rd to Al Kazeem at Ascot, when left to much to do. She was expected to build on that last time, but ran no race in the Eclipse. Even if she bounces back to her best, I think she has it all to do to win a decent group 1 at 12 furlongs. 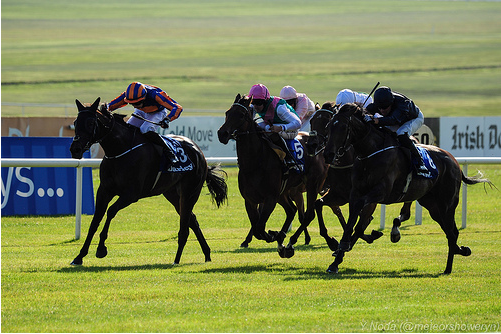 Venus De Milo has had just 4 career starts, and has progressed with each. After winning her maiden, she showed massive improvement to win a 10 furlong listed race at Naas, looking like the trip was a minimum for her. Next time in what looked a good field for the Irish Oaks, she got outpaced when they quickened, before flying home to come 2nd, beaten just 1/2l. The pace was very steady that day, and it was perhaps with this in mind that Joseph made all on her next time. He again didn’t go very fast but at least she was in the right spot, and while taking a while to pick up she won going away. A 3 1/2l win at 1/4, after getting a few slaps mightn’t seem like great form, but speed is not this fillies forte, and if she gets a proper test tomorrow she can show what she’s capable of.

Wild Coco drops back to 12 furlongs here, after running at 14 furlongs or more the last 3 times. The last time she ran at 12, she got hammered in a listed race. Last time she won a group 3 at Goodwood quite easily, but the horses she beat would be only listed class horses, and this drop in trip can’t  be a plus. Her best form isn’t good enough, and it’s hard to see her winning unless they somehow went far to fast, and turned it into a real stamina test. Even in that scenario I’d expect Venus De Milo to easily take care of her.

Riposte improved for each of her first two starts, and won the Ribblesdale on her 3rd start. That wasn’t a great affair though, with the doubtful stayer Just Pretending chasing her home. Next time in the Irish Oaks, Riposte finished behind Venus De Milo, despite being in a better position off the slow pace, and she was fading out of it late on, suggesting had they gone faster she would have got well beaten. That run was disappointing and as I don’t think her previous form will be good enough either, she has quite a lot on to win this.

Secret Gesture easily won the Lingfield Oaks trial on her 3rd start, before running very well in the Oaks itself, coming 2nd to Talent. A case could be made to say she was better than the result too, as she was up with an overly strong pace, when Talent was ridden more optimally held up. The form of that race hasn’t been working out the best, and I think the Irish Oaks was a stronger race, despite a messy finish. Secret Gesture got beat in the German Oaks last time, without any obvious excuses, and she will need to improve to win this. Her odds of 9/1 look about right.

Emirates Queen is a 4 year old who has shown progressive form this year, winning a group 2 at Haydock, before coming 3rd in a group 2 at Deauville. That form won’t be good enough for this, and I doubt she’ll improve enough either. The same applies to Moment Of Time who finished 2nd to her in that Haydock race.

Scintillula came 4th in the Irish Oaks, like Venus De Milo looking like the slow pace inconvenienced her, staying on strongly at the death. She then did very well to beat Mars over an inadequate 9 furlongs next time, but has taken a backward step the last twice. She was only beaten 1l at Leopardstown by Ernest Hemigway, but Royal Diamond split the two in 2nd, and finishing behind him over 12 furlongs isn’t group 1 form. Last time she ran poorly at the Curragh and its possible her busy spell has caught up with her. In any case she has no were near the scope Venus De Milo has to progress.

For The Fugue to win this, she’ll need to bounce back to her best, and also hope the pace is less than true, as if they go a proper gallop I can’t see her beaten Venus De Milo. I have little faith in Ballydoyle getting their tactics right in these big races, but Ryan Moore riding is a big plus, and considering she made the running last time, they have no excuse for not going on if nobody else is going to go a gallop. Even Aidan wouldn’t accuse this filly of having ‘loads of speed’ and they must know a good pace is required. The long straight will suit too, and I find it hard to see her beaten. As such I think the 11/4

Stakes are on a scale of 0-10. Further details can be found in Free Horse Racing Tips – Staking and Betting Bank size Recommendations

Don’t forget to make sure you sign up to multiple bookie accounts so you can always get on at the recommended price, and you can also avail of the generous Free Bets they have for new customers while your at it. Also use the Odds Comparison Tool to ensure you always get the top price on your fancy.

BOG stands for Best Odds Guaranteed, which means if you take a price and SP is better, you get the SP.

If you find this post interesting, please share it via the social media buttons, you own blog, or online forums.

About the Author: Declan Meagher